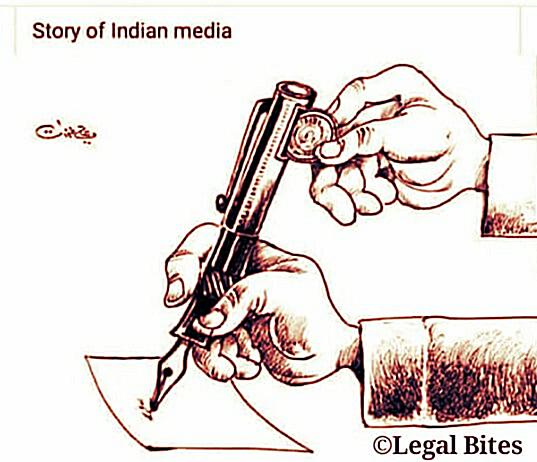 The media has faced tons of accusations of paid news. This is not a recent issue. The issue of paid news has been around ever since media was privatized. A surprising number of cases have come up which show just how bad the media is compromised.

For instance, in 2010, there was a huge furore as the Press Council of India was forced to investigate some of the major news organizations for paid news. Essentially, several news organizations had been selling news space to politicians during election time. But they weren’t clarified as advertisements – meaning they had disguised adverts as news.1

The ‘paid news scandal’ is once again making headlines – albeit only on small, independent news portals.

Indian news website Cobrapost released a number of sting videos of senior officials of some of the major media organizations, as a part of its ‘Operation 136’. 136 refers to India’s ranking in the World Press Freedom Index. The videos show conversations between the officials of various media houses and an undercover journalist conducting negotiations for proposals to promote “Hindutva” agenda and content criticising the opposition parties – Congress, BSP, SP and the JD(S) in return for money.

Posing as an “Acharya” and representing a fictitious Shrimad Bhagwat Gita Prachar Samiti, Sharma laid out his political campaign in three phases. In the first phase, he asked media groups to promote Hindutva through religious programmes. In the second phase, he asked the media houses to promote speeches of Hindutva leaders to “polarise the electorate on communal lines”. As the elections approach, the campaign would target opposition leaders, using demeaning terms such as “Pappu”, “Bua” and “Babua”.3

In journalism ethics, sting operations are not considered an ethical means of obtaining information. Moreover, the videos released by Cobrapost cannot be verified to be the ultimate truth. Cobrapost has received a stay order from the Delhi High Court debarring them from including the Dainik Bhaskar Group. It has also been sent a legal notice by the India Today Group asking it to pull down its videos. Until these cases can be resolved and the truth comes out, no one side can be fully trusted. However, if there is even a sliver of a chance that the sting videos are telling the truth, then it is a very serious threat to our democracy.

Another aspect of the #SoldMedia is the media coverage of the Tuticorin protests. For a full 100 days, people of Tuticorin, a district in Tamil Nadu, protested against Vedanta’s Sterlite Copper unit. Residents allege waste from the unit has polluted the water bodies in the region and that they are facing several health issues. Police responded to the protests by open firing on the protesters, following which 13 people were killed.

While the print media did cover the story, there was little or no coverage of such a core issue in mainstream broadcast media. There were no debates, no discussions on something so important to the people of Tamil Nadu. This makes one wonder just where the loyalty of the media lies – to the people of the nation or the big corporates.

Understanding the media is extremely difficult and reports such as the Cobrapost’s sting can lead to even greater confusion. It becomes hard to decide who you can trust and who you can’t. Most, if not all, media houses are sold – to politicians and to corporates.

In such a situation, the best we can do is to question everything and to not blindly trust any organization. That said, there can be no excuse for the media behaving the way it does. It falls on us to demand what we deserve – a free and fair media so that it can successively perform its role of the fourth pillar of our democracy.