Solemnization of Marriage with Special Reference to Live-in Relationships

The performance of shastric ceremonies has been deemed to be essential for the solemnization of marriage under the Hindu Marriage Act of 1955. Introduction There is no particular law as specified with regards to “live-in relationships” in India and no enactments to define the rights and liabilities of the partners cohabiting in a live-in relationship. This article deals… Read More » 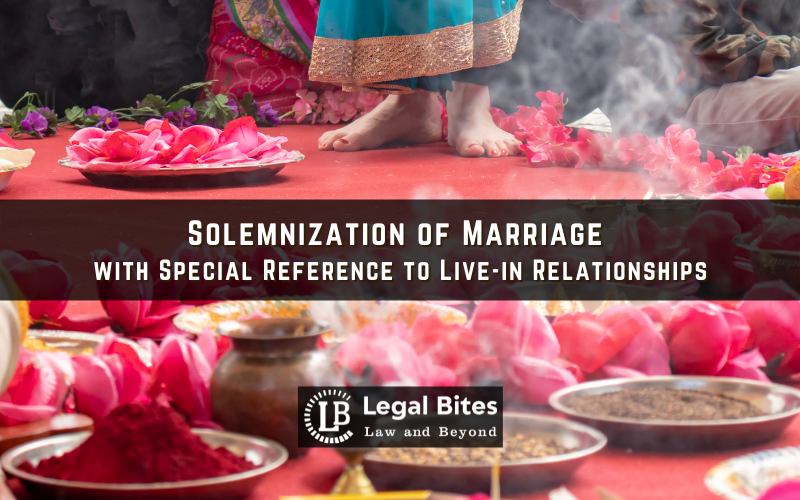 The performance of shastric ceremonies has been deemed to be essential for the solemnization of marriage under the Hindu Marriage Act of 1955. Introduction There is no particular law as specified with regards to “live-in relationships” in India and no enactments to define the rights and liabilities of the partners cohabiting in a live-in relationship. This article deals with the practices necessary for the solemnization of a valid marriage under the Hindu Law in reference...

The performance of shastric ceremonies has been deemed to be essential for the solemnization of marriage under the Hindu Marriage Act of 1955.

There is no particular law as specified with regards to “live-in relationships” in India and no enactments to define the rights and liabilities of the partners cohabiting in a live-in relationship. This article deals with the practices necessary for the solemnization of a valid marriage under the Hindu Law in reference to Section 7 of the Hindu Marriage Act, 1955 and also examines the status of live-in relationships as recognized by the statues and the courts with regards to the presumption of marriage as laid down under the Section 114 of the Indian Evidence Act, 1872

(1) A Hindu marriage may be solemnized in accordance with the customary rites and ceremonies of either party thereto.

(2) Where such rites and ceremonies include saptpadi (that is, the taking of seven steps by the bridegroom and the bride jointly before the sacred fire), the marriage becomes complete and binding when the seventh step is taken.

Ceremonies of Marriage under the Hindu Law

The performance of shastric ceremonies has been deemed to be essential for the solemnization of marriage under the Hindu Marriage Act, of 1955. The ceremonies and rites as mentioned under Section 7 of the Act can be classified under two heads[1]:

It has been established that it is necessary to perform saptapadi before the sacred fire. However, the chanting of the mantras is not as necessary when considering the validity of the marriage and the due performance of the rites would be enough for the solemnization of a Hindu Marriage.

The Madras High Court in Deivani v. Chindavdram[2] held that the two essential ceremonies to be performed for the solemnization of a Hindu Marriage are namely, kanyadaan or the gift of the girl and the saptapadi and if saptapadi is omitted and all other ceremonies are performed then it cannot be a valid marriage. In a recent judgment by The Calcutta High Court, Tarapada Jana v. Kumar Bhawani Giri[3] it was held that if Saptapadi is duly performed, the mere allegations that shlokas were not recited would not invalidate the marriage.

If there is a customary ceremony prevalent amongst either side of the party and it is performed with due regard then it will be enough for the validity of the marriage as per the requirement of Section 7 of the Act. For customary rites and ceremonies to be accepted, it must be shown that such custom has been followed from ancient times amongst the members of the particular caste, community, sub-caste, and such ceremony having been received with time the recognition of a ceremony being obligatory in nature (Rabindra Nath v. State)[4]. The customary ceremony as recognized can be non-religious or simple in nature and can consist of only one ceremony.

The performance of saptapadi hence is not a necessary requirement of every Hindu Marriage. There are many communities in India with their own specific customary ceremonies which have received valid recognition over the period of time, some are listed below

Consequences of Non-Performance of the necessary Rites and Ceremonies

The necessary ceremonies either Shastric or customary as prevalent on the side of the bride or the groom, must be performed in order to receive the recognition of a valid marriage as per the Hindu Marriage Act, 1955.[9] It was held by the Supreme Court in Banu Rao v. State of Maharashtra[10] that the performance of necessary ceremonies has been deemed to be necessary for the prosecution of bigamy and on the failure of such performance prosecution for bigamy cannot succeed.

In A.N. Mukerji v. State( 1969 All 489), where a physician was prosecuted for bigamy and it was alleged that three ceremonies of marriage at three different times were performed i.e one being the moon ceremony, second being the exchange of garlands in Kali temple after walking seven steps, an imitation of saptapadi and the third performed before The Guru Grantha Sahib, an imitation of the Sikh ceremony as the woman was Sikh.

It was held by the court that, the performance of mock ceremonies of marriage does not constitute valid ceremonies and therefore prosecution for bigamy failed. The question of the performance of necessary ceremonies has been held in numerous cases to be important for the restitution of conjugal rites and if no valid ceremony has been performed the restitution of conjugal rites cannot be granted.[11]

Status of Live-in Relationships and the Section 114 of the Indian Evidence Act, 1872

Section 114 of the Indian Evidence Act, lays down that, the court may presume the existence of any fact which it thinks likely to have happened, regard being given to the common course of natural events, human conduct, and public and private business, in a relationship as to the facts of the particular case. Therefore, where a man and a lady live respectively for a long spell of time as a couple then there would be an assumption of marriage. Where independent evidence of solemnization of marriage is not available, it will be presumed to be a valid marriage by continuous cohabitation between the parties unless the contrary is proved.

It was held in Madan Mohan Singh v. Rajni Kant[12] by the Supreme Court that law presumes in favour of marriage against concubinage. Therefore, going by the principle, where a man and a woman have cohabited for a long time they are presumed to be married. It has been also observed that a long-continued live-in relationship cannot be just a walk-in-and-walk-out relationship and children out of such relationships are legitimate.

It was held in Anandi v. Onkar[13] that, if a community of neighbours treats a couple as husband a wife, they are thus reputed to be married and the burden of proof that they were not properly married lies on the party asserting so.

In a landmark judgment of S. Khushboo v. Kanniammal, The Supreme Court broadened the horizons and held, that live-in relationships come within the ambit of the right of life under Article 21 of the Constitution of India and recognized it as a permissible act of two major living together which cannot be considered illegal or unlawful.

In the case of Indira Sarma v. V.K.V. Sarma(2013), 15 SCC 755 the Supreme Court observed that a live-in or marriage-like relationship is neither a crime nor a sin though socially unacceptable in the country. The decision to marry or not marry or to have a heterosexual relationship is intensely personal. In this case, the court gave out five categories of life in relationships which can be considered and proved in the court:

In the case of Tulsa & Ors v. Durghatiya (2008), while referring to Section 114 of the Indian Evidence Act, 1872 the court held that the provisions under the said section refer to a common course of natural events, human conduct, and private business. The court shall presume the existence of facts that are likely to have happened. While interpreting Sections 50 and Section 114 of the Indian Evidence Act, 1872 combinedly, it is evident that the act of marriage is to be presumed from the view of the common course of natural events.

In a landmark judgment of Dhannu Lal v. Ganeshram(2015), the Supreme Court decided that couples living in live-in relationships will be presumed legally married. It was also held that the woman in the relationship would be eligible to inherit the property after the death of her partner.

The essentiality and indispensability of the ceremonies with regards to the valid solemnization of marriage amongst the Hindus cannot be debated. The Hindu Marriage Act, 1955 has very well accommodated the needs of different communities amongst the Hindus by giving valid and equal recognition to shastric ceremonies as well as customary ceremonies important to various communities. With the evolution of the needs of the times and the practiced social behaviours where now live-in relationships have become a common phenomenon, an attempt has been made by the statutes to recognize such relationships in order to facilitate the operation of laws for the benefit of all.