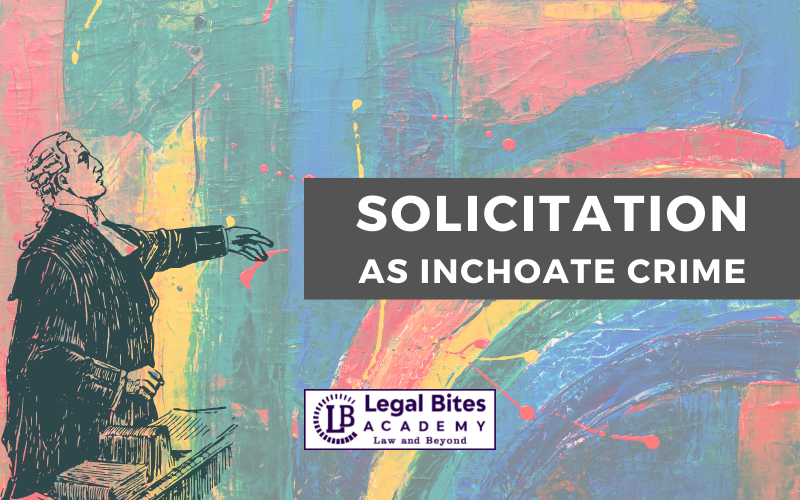 This article by Nilanjana Banerjee presents an overview of Solicitation as an Inchoate Crime and provides an insight into the possible defences, that could be employed. Crimes have two basic elements i.e. actus reus and mens rea. However, there are aspects of crime that are at a primary stage, which calls for a law that punishes unfinished acts and such are known as inchoate crimes. Since every unfinished act cannot be punished, there is a requirement of other elements to satisfactorily come under the category of inchoate crimes. These criteria also varies from crime to crime. Basically, United States identifies three inchoate crimes. They are – Attempt, Conspiracy and Solicitation.

Solicitation is inducing others to commit any crime, conspiracy is agreeing with two or more parties to commit a crime and an attempt is going beyond preparatory stages in pursuance of committing crimes. This article aims at discussing solicitation, its elements, defences (in the context of the US only). Moreover, it will try to elaborate on why the defences are available.

The general concept of crime says that the wrongful act has to be completed to be counted in the category of crimes, which means that the elements of actus reus and mens rea are a must. But there are altogether different sets of acts in which an unfinished act can also classify as a crime and they are called inchoate crimes.

In layman’s terms, inchoate means ‘just begun, incipient or in early stages’. Hence inchoate crimes are those which have just begun or the offender has just attempted to commit so, but could not finish the act. Subsequently, the unfinished act leads to a separate crime that a finished act would have led to. But not necessarily, every unfinished act will lead to inchoate crimes. The elements needed for such qualification will be discussed subsequently.

The reason for incorporating unfinished acts as a crime is to punish the wrongdoer and prevent him/her from committing any gravely injurious act. This is so because there are chances that the offender who could not complete the crime ( and was left unpunished ) would try to interfere and cause injury.

What Are Inchoate Crimes?

At an early stage, an attempt was not considered a crime, but as law evolved with passing time, it came to be known as crime. The first case in this context was Rex v. Scofield[2]. In this English criminal law case, an attempt was included as a part of a crime under common law. The defendant was held guilty for his unsuccessful attempt to burn down a house.

Subsequently, in the Higgins Case, the court again upheld an unsuccessful attempt. This rule was then widely accepted in US courts too. In most of the statutes, ‘attempt’ is often left undefined and the courts are open to decide the meaning.

It is highly confusing to understand which acts to punish as attempts. Only a very few cases give a clear idea of which acts can be criminalised as an attempt, while a startling percentage of cases are not.

Basically, the statutes criminalising attempts are of two types i.e. general and specific. General statutes lay down some elements and they can be applied to any criminal offence while the specific statutes define attempt for every distinguished crime like murder, robbery, rape etc.

Attempt is not committed just by plotting or planning an offence. Moreover, mere preparation is also not enough to be convicted for the attempt. It is determined by several tests like proximity test, probable desistance test, substantial steps test etc.

Conspiracy is another inchoate crime. It punishes for agreeing to commit a criminal offence. The criminal act element required to convict for conspiracy is an agreement between two or more parties to commit any unlawful act. In the case of State v. Bond, the court had said that the agreement does not have to be formal or even in writing. The criminal intent required, is to purposely agree with the other parties to commit a crime.

As per the Model Penal Code, “ a person is guilty of conspiracy if, with the purpose of promoting or facilitating its commission, he (a) agrees with such other person that they will engage in conduct which constitutes such crime.”[3]

There are two organizational formats of conspiracy i.e.- wheel conspiracy and chain conspiracy. In the former, one single conspirator is connected to every other co-conspirator while in the latter there is links like in a chain but no central conspirator.

Another inchoate crime as recognised by the US is solicitation which criminalises instigation to commit an unlawful act. It requires words to induce another individual to commit a criminal offence and specific criminal intent. This will be discussed in detail subsequently.

Solicitation is that inchoate crime that involves seeking out another individual to engage in any criminal offence. The offender can be charged with solicitation if that individual induces another to commit any crime. Example – If a boy goes to his friend and asks him to shoplift a cricket bat for him, this is solicitation even if the friend does not go and shoplift the cricket bat.

Once the individual has the intention to commit solicitation, the criminal act of solicitation is extremely easy to commit. What is required is, the individual has to encourage another in some way or the other to commit a crime. It can take any form such as to request, encourage, entice, advise, command, procure, hire, force etc. As soon as any of the aforementioned acts happen, the crime of solicitation is already completed. Unlike other inchoate crimes (conspiracy and attempt) where an additional act in furtherance of crime is a must, in solicitation, there is no actual action needed on part of the doer to actually commit solicitation.

Why Solicitation is an Inchoate Crime?

Solicitation is a precursor to conspiracy as it intends to criminalise instigation of any agreement to commit a criminal offence. Inchoate crimes aim at punishing those offences which may not be completed. Although it does not lead to any finished criminal offence, it could lead to the completion of it.

Therefore, solicitation is an inchoate crime as there is a possibility that conspiracy or agreement to commit a crime will never be formed or that the object will actually never be committed. Therefore its incomplete nature makes it an inchoate crime.

Every criminal offence has two basic elements i.e. the criminal act and criminal intent. The criminal act required for solicitation is generally those spoken words that induce another to commit any crime. According to the Model Penal Code, it doesn’t require any direct communication, if the conduct sufficiently signified the effect of such communication[4].

In simpler words, asking anyone to commit a crime satisfies the criminal act element of solicitation. Inducing another individual to commit a crime can take several forms like a suggestion, request, encouragement, command, entice, force etc. There is no need for any additional act in furtherance of the crime itself, unlike conspiracy and attempt.

Suppose John and Mike are friends. John calls Mike and asks him to help in selling the stolen shoes. This is solicitation if both of them are operating in such a state where solicitation is just for the commission of any felony. Moreover, if John and Mike are in a long-standing agreement in dealing with such stolen items, then John’s act of keeping such stolen things at Mike’s place signifies solicitation. Communication by words is not always necessary.

The second element is criminal intent, wherein the person inducing should have done so purposely or with a specific intent. To prove this element, it is a must that the prosecutor shows the defendant’s affirmative intention to have a crime committed ( by another). However, a person may not be charged with solicitation if he or she has mistakenly asked another individual to commit a crime ( while they were not aware that such an act is a crime).

Suppose Harry needs a land mower, he assumes that his neighbour has allowed him to take it(but in reality he was not allowed). So Harry asks his son to bring that land mower. Here Harry has not committed any solicitation.

Many states allow renunciation as an affirmative defence for the crime of solicitation. Model Penal Code states that “it is an affirmative defence that the actor, after soliciting another individual to commit a crime, persuaded him not to do so or otherwise prevent the commission of the crime, under circumstances manifesting a complete and voluntary renunciation of his criminal purpose.”[5]

It signifies that the renunciation must be complete and voluntary. Two reasons are identified for using renunciation as a defence. Firstly, renunciation indicates a lack of firmness in committing any dangerous activity. It is that same rationale that prohibits making ‘preparatory activities’ a crime. The criminal law does not condemn a defendant where there is an insufficient thing to show the firm purpose of committing a crime.

Secondly, the law should aim at encouraging those who abandon courses of criminal activity,(as the solicitor renounces commission of the crime). The defence of Renunciation gives a warning to the police and offers them a chance to prevent the commission of the crime by keeping an eye on the suspected offenders.

But renunciation is not available for defence in such situations where any unforeseeable circumstance thwarted the commission of such solicited crime.