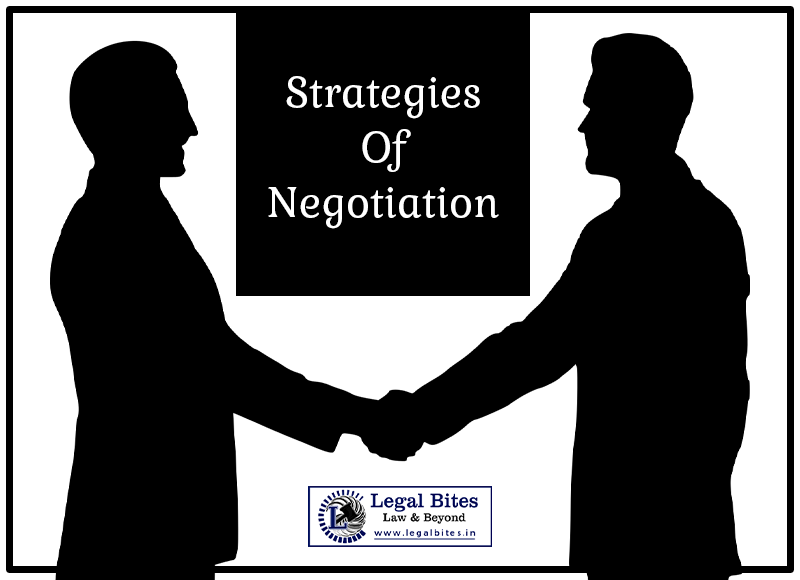 No matter what is type negotiation is an art that can be perfected through the various strategies of Negotiation. In the book ‘Art and Science of Negotiation,’ it is mentioned that negotiation is both an art and a science. The Science part of negotiation consists of the ‘systematic analysis’ of the problem and the art part consists of interpersonal skills and the charismatic way of argumentation. Prerequisites The voluntary consent of both parties to negotiate on the...

No matter what is type negotiation is an art that can be perfected through the various strategies of Negotiation. In the book ‘Art and Science of Negotiation,’ it is mentioned that negotiation is both an art and a science. The Science part of negotiation consists of the ‘systematic analysis’ of the problem and the art part consists of interpersonal skills and the charismatic way of argumentation.

There are several strategies that one can adopt to effectively continue the negotiation process but here we will be discussing 4 major strategic techniques:-

Bargaining is a type of hard-negotiation strategy where the parties seek to establish a win-lose situation. It establishes a situation of the competition among the parties. It is an over-ambitious stance that often results in a deadlock.

The breakdown of the process of bargaining can be expressed in the following points:-

In the concluding position, both parties have a mutually beneficial, joint solution to representation in the bargain. The system of bargaining, however, encourages the parties to play competitively with one another. The main reason behind this is the fear that the parties will take advantage of the situation and force upon their opponents to come to an unstable position.

This system of bargain became an important approach in international negotiations in the decades of the late 60s and early 70s.

This system of bargaining is mainly adopted from the Anatol Rapoport’s book Fights, Games and Debates in 1960. This relates closely to the ‘Game Theory’.

“At present game theory has, in my opinion, two important uses, neither of them related to games nor to conflict directly. First, game theory stimulates us to think about conflict in a novel way. Second, game theory leads to some genuine impasses, that is, to situations where its axiomatic base is shown to be insufficient for dealing even theoretically with certain types of conflict situations. These impasses set up tensions in the minds of people who care. They must, therefore, look around for other frameworks into which conflict situations can be”[1]

2. Getting to Yes: Roger Fisher and William L. Ury

Getting to yes is the name of the 1981 non-fiction written by Roger Fisher and William l Ury. This process of negotiation enshrined in this particular book is often called the Fisher/Ury method of negotiation. It was the international bestselling book on negotiation in the 80s.

The origin of this book revolves around the flagship project at Harvard University known as the Harvard Negotiation Project. Both Fisher and Ury were associated with Harvard. Both of them singularly were negotiation activists. Fisher, was an audience to the devastating 2nd world war so when in Harvard later on, he became inclined to the art of negotiation as a method of settlement of disputes.

The title of the book says – Getting to yes: Negotiating without giving in. The title itself mentions how to negotiate and thus come at a middle ground and avoiding the impasse.

The book is divided into the following strategies that one should follow towards successful negotiations:

Three impediments to negotiation and consecutive ways to overcome these obstacles are also mentioned.

Thus the process of ‘GETTING to YES’ begins with analysis, where a careful breakdown of the problem and the situation is done. The other parties interests are considered and the various options are exploited. Finally, the agreement should be achieved in a win-win situation.

1. Separation of people and issues

People should avoid combining people and their issues. Here Fisher/Ury talks about the three common problems encountered during the process of negotiation:

2. Focus on the interests

The parties to a negotiation can several underlying interests. It would do well, therefore, to focus on a particular interest at a time and simultaneously consider the other persons. If one party shows inclination in the other party’s interest then there will be an atmosphere of amity.

The meaning of objective criteria includes the scientific approach, dividing the article, determining the legal position, etc. This is a more pragmatic, sensible approach to the dispute at hand.

The three positions that can arise out –

Power differences can never be bridged up. Fisher and Ury have suggested certain process to protect the weaker party and to help the weaker party make the most of their assets, where the party is asked to focus more on the BATNA (Best Alternative To A Negotiated Agreement).

When one of the parties resorts to using cheap tricks the best way to handle is to explicitly mention that to the negotiation process itself.

The weaker party should concentrate on analyzing its best alternative to a negotiated agreement (BATNA). The weaker party is generally not considered the agreement that would leave them worse off than their BATNA. Therefore the party should be aware of the BATNA. BATNA is used to gain the greatest out of the assets.

The parties in a negotiation are considered powerful because they have the scope of walking away. The party with the best BATNA is considered to be in a better stance. All the parties in a negotiation should try to estimate and analyze not only their BATNA but also the other parties BATNA as well because ultimately the winning edge depends on the person with the best BATNA. The parties throughout the negotiation process should try to increase the winning chance of their BATNA.

ZOPA is the abbreviated form of a “Zone of Possible Agreement“. It is also called the bargaining range. ZOPA is the zone that would benefit both parties to the maximum apart from the other agreements between the parties.

The ZOPA range once invented becomes critical to the outcome of a negotiation. But it generally takes some time to determine where the ZOPA exists; it is evident known once the parties explore their various interests and options. The major impediment leading to the prevention of the parties from attaining he ZOPA that the parties are not ready to fully reveal their confidential information. However, once the ZOPA is successfully found out the parties can easily come into an agreement.