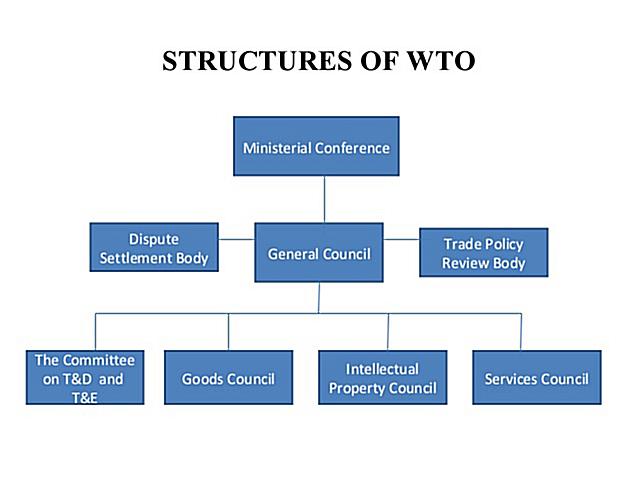 Structure of the World Trade Organisation:

WTO is headed by the Ministerial Conference who enjoys absolute authority over the institution. It not only carries out functions of the WTO but also takes appropriate measures to administer the new global trade rules. It is integrated by representatives of all WTO Members and shall meet at least once in every two years. It is the chief policy-making body of WTO and any major policy changes, such as a decision to alter competition policy or to rewrite the WTO agreement, require its approval.

In addition to these, the structure of the WTO consists of a General Council to oversee the WTO agreement and ministerial decisions on a regular basis. It is also formed by the representatives of all WTO Members and acts on behalf of Ministerial Conference whenever the Conference is not in sessions. The General Council also meets as the Dispute Settlement Body and the Trade Policy Review Body. The Council sits in its headquarters Geneva, Switzerland usually once a month.

In addition to these councils, Working Parties can be established by the General Council in order to deal with specific issues defined by General Council.

Trade Committees are formed for delegation under four authorities, namely:

Each committee organizes its own procedures and may establish further subsidiary committees if it seems fit. They also serve as the forum for discussions on ways to improve trade. And the Committees meet once every two to three months.

The WTO secretariat (numbering 625 of many nationalities) is headed by Director General who is appointed by Ministerial Conference. The Secretariat of the WTO is responsible for servicing the WTO bodies with respect to negotiations and the implementation of agreements. Since decisions are taken by Members only, Secretariat has no decision making power.

The task of ensuring that all Members live up to their commitments and that there is a common understanding of the nature of those commitments is a central part of the work of the WTO. WTO’s procedure is a mechanism which is used to settle trade dispute under the Dispute Settlement Understanding (DSU). A dispute arises when a member government believes that another member government is violating an agreement which has been made in the WTO. And the dispute settlement under WTO not only ensures security and predictability to the multilateral trading system but is also concerned with the situations where a Member seeks remedy for damage to its trade interests caused by the actions/inactions of other members. There are different stages of dispute settlement under WTO which are as follows:

Functions of the World Trade Organisation:

The WTO was founded on certain guiding principles—non-discrimination, free trade, open, fair and undistorted competition, etc. In addition, it has a special concern for developing countries.

At the heart of the Organisation are the WTO agreements, negotiated and signed by the bulk of the world’s trading nations. The goal is to help producers of goods and services, exporters, and importers conduct their business. The WTO’s overriding objective is to help trade flow smoothly, frets, fairly, and predictably.

With these objectives in mind, WTO is performing following functions: