Code of Conduct for Police in India (National Police Commission 1977)

A Code of Conduct for police was prescribed by the National Police Commission (NPC) which was based on one, adopted in the conference by the Inspectors General of Police (IsGP) in 1960 (IsGP Conference is an annual feature. All the IGP’s of State Police and other Central and Para Military Police Forces meet annually in a conference and… Read More » 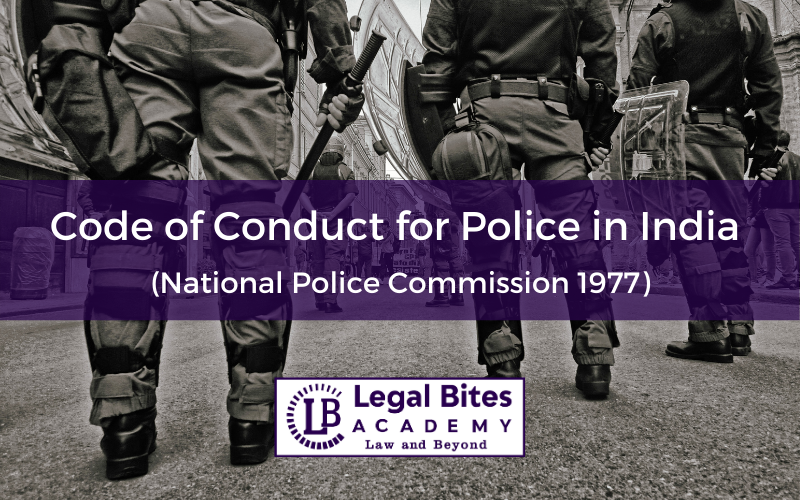 A Code of Conduct for police was prescribed by the National Police Commission (NPC) which was based on one, adopted in the conference by the Inspectors General of Police (IsGP) in 1960 (IsGP Conference is an annual feature. All the IGP’s of State Police and other Central and Para Military Police Forces meet annually in a conference and deliberate upon the contemporary issues facing police. The recommendations are forwarded to the Ministry of Home, Govt. of India). In order that the role...

A Code of Conduct for police was prescribed by the National Police Commission (NPC) which was based on one, adopted in the conference by the Inspectors General of Police (IsGP) in 1960 (IsGP Conference is an annual feature. All the IGP’s of State Police and other Central and Para Military Police Forces meet annually in a conference and deliberate upon the contemporary issues facing police.

The Government of India appointed the National Police Commission (NPC) in the year 1977 which emphasised the role, functions and accountability of the police organisation. Alongside, it also referred to the relations with the public, political interference in its work, misuse of power and evaluation of its performance.

As the first national commission in India since independence, it was set up with great expectations in extraordinary circumstances Commissioned by the Janata Party government that had defeated Indira Gandhi’s government in 1977. The context behind establishing this commission was the background of the ‘emergency period’ in which police had exercised blatant misuse of power. Hence, expectations from this commission were really high so as to bring fundamental changes in the criminal justice system.[1]

Unexpectedly, the Janata Party government was not able to stay in power for long and in the year 1980, with the mid-term elections, Indra Gandhi again came to power. However, up until 1981, the commission was working and was successful in submitting eight reports with numerous far-reaching recommendations to reform the police.[2]

The following are the recommendations made by the committee established between 1979 and 1981:

1. Complaints Against the Police

As per the provisions of the NPC, any plan for inquiry into objections against police ought to be satisfactory both to police and the public as reasonable and just. The Commission consequently recommended plans, which would incorporate requests directed by departmental specialists and those directed by a free authority outside the police. The Commission felt that an enormous number of complaints against police ought to be investigated and arranged off by the administrative positions in the police progression.[3]

The Commission anyway suggested that a judicial inquiry ought to be made compulsory in the accompanying classifications of objections against the police:

The judicial inquiry ought to be held by an Additional Session’s Judge designated for this reason in each region by State Government in conference with the High Court. He will be assigned as the District Inquiry Authority (DIA) and be helped by an assessor. The DIA will send the report of the inquiry to the State Government. It will be compulsory on the piece of the public authority to distribute the report and choices taken subsequently inside two long periods of receipt of the report.

The DIA will likewise fill in as an autonomous power to supervise a definitive removal of complaints managed departmentally. To supervise the palatable execution of the whole plan, a Police Complaint Board ought to be set up the state level.

The essential role of the police is to work as a law implementation organization and render fair administration to law, with no regard to wishes, signs or wants to be communicated by the government which either come in struggle with or don’t adjust to the arrangements contained in the constitution or laws. This ought to be spelt out in the Police Act. The police ought to have properly perceived help situated role in giving alleviation to individuals in trouble circumstances. They ought to be prepared and prepared to play out the assistance situated capacities.[4]

In the current setup, the police work under the chief control of the state government. As indicated by the Commission, the way where political control has been practiced over the police in this nation has prompted net maltreatments, bringing about disintegration of rule of law and loss of police believability as an expert association. The danger of move/suspension is the strongest weapon in the possession of the legislator to twist the police down to his will. The Commission suggested that the administration of the state government over the police ought to be restricted to guarantee that police execution is in exacting agreement with law.

In the presentation of its assignments, the police ought to be dependent upon in general direction from the public authority which should set down wide approaches for selection in various circumstances. There ought to anyway be no guidelines with respect to real tasks in the field. As to examination work, regardless, the police are past any mediation by the chief or government officials.[5]

Victims are mostly dismissed from a police station on the simple ground that the detailed wrongdoing has happened in the purview of some other police station and it is for the victim to go there and submit his question. This works to the impediment of uninformed individuals and more fragile areas in the public eye. The NPC has suggested a significant correction to Section 154 Cr.P.C. which would make it an occupant on a police station to register an FIR whether the wrongdoing has occurred in its locale and afterwards move the FIR to the concerned police station, if fundamental.[6]

The NPC has suggested that ladies police ought to be reinforced and appointed examination work in a lot more noteworthy measure that at present Women police ought to turn into a fundamental piece of the police association and used to manage violations against ladies and youngsters and in handling the issue of adolescent wrongdoing. They ought to at the appointed time share every one of the obligations currently performed by their male partners. They ought to be enrolled in a lot bigger numbers than at dislike, especially in the positions of Assistant Sub-inspectors and Sub-inspectors of Police.

Police stations in urban communities with more than 900 cognizable IPC workplaces ought to have a Dy. SP/ASP as SHO. Police Stations researching more than 300 IPCs each year ought to be going by a Controller of Police. The third classification will comprise of more modest police stations headed by Sub-Inspectors.

An investigating official ought to not be needed to research more than 50 – 60 IPC cases in India.

There ought to be consistent checking of the exhibition of the police powers in the country. The State Security Commission ought to have a free cell to assess police execution. The yearly organization report of the top of the police power and appraisal report of the Central Police Committee will give extra material to the State Security Commission to set up the last report on the presentation of the state police to be put before the State Legislature.

The significant suggestions of the NPC have remained unimplemented. There is deep-seated and solid protection from police changes. Lawmakers and civil servants have built up an incredible personal stake in holding control and administration over the police association. Characteristic of the profoundly dug in protection from police change is the way that a letter composed regarding the matter in April 1997 by Shri Indrajit Gupta, the then Union Home Priest to the Chief Ministers of all States admonishing them to transcend tight sectarian or political contemplations and present police changes on the lines suggested by the NPC neglected to deliver even a solitary reaction.[7]

Inside the police foundation likewise, there are the individuals who are substance to hold the status quo. Firmly connected with incredible interests, they submit in and permit the framework to proceed. The current framework is unsuitable. It has brought about undermining law and order and in impeding the development of a sound and expert arrangement of policing. It should change. After reading all the above problems and limitations of the Indian Police, one may come to the conclusion that there is a dire need for reforms in the existing police system in the country.

After reading about all the reforms and their reports, it can be concluded that the recommendations of none of the committees have been taken into account seriously and that there has been no or very little change in the conditions of the police in India. Society has undergone many changes economically and politically, but there have been almost negligible changes in the Indian Police structure.