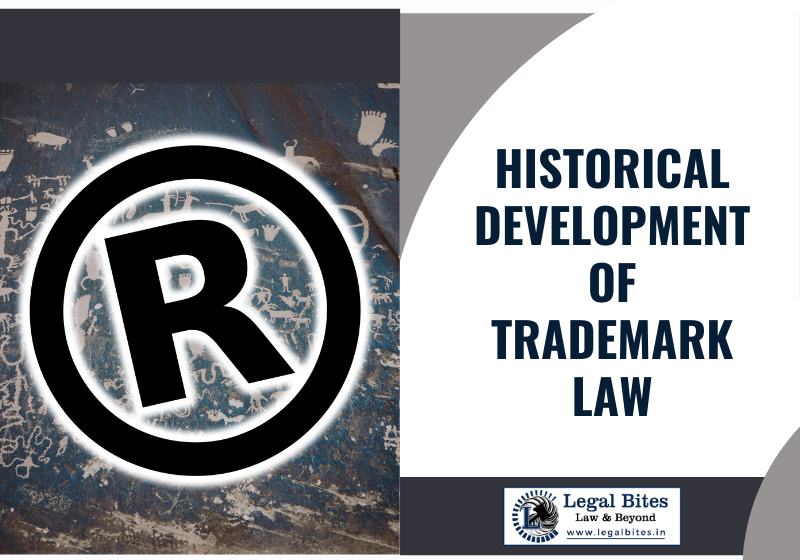 At present, there are various laws that govern trademark laws on a national & international level. However, to understand the circumstances in which the modern trademark law came into being, it is pertinent to our discussion here to ask about the origins of trademarks. This article traces the origins of the concept of a trademark as well as the development of trademarks laws around the globe. I. Introduction “A trademark is any sign that individualizes the goods of a given enterprise...

“A trademark is any sign that individualizes the goods of a given enterprise and distinguishes them from the goods of its competitors.”

The growth of market-oriented economies and industrialization has opened up an extraordinary opportunity for manufacturers and traders to offer consumers a myriad variety of goods. These various products, especially the ones in the same category, make it difficult for the consumer to choose between the various alternatives.

The products of the same category, though may not offer much apparent difference on the face of it, however, these products do generally differ in the quality, price & other characteristics. This similarity of the products opens up the gateway for trademarks to provide much-needed guidance to the customers to choose between the competing goods. Just as trademarks allow consumers to differentiate between various competing goods, trademarks also allow manufacturers and enterprises to mark their products uniquely from their competitor’s.

II. The Story Of the Origin of Trademarks

One of the earliest evidence of “marking” (as in trademark) was the branding of cattle and other animals. Since this began way before reading and writing came into the picture, the early form of branding was in the form of designs only. Wall paintings of ancient Egypt show cattle being branded by field workers. Cave paintings of south-western Europe, dating from the late Stone Age or early Bronze Age, show cattle branded on their flanks.[1]

Additionally, pottery jars were necessities of daily life in Greece and Rome, and interestingly, the maker’s name generally was placed on the handle.

Porcelain, which was invented in China, also bore date marks, identifying the emperor during whose reign the object was made. Sometimes the maker’s name also appeared occasionally and this was accompanied by an indication of the place of manufacture or of the destination specified for the particular piece.

There is also evidence of markings on bricks and tiles from Mesopotamia and Egypt. [2]

Many Roman terra-cotta tiles and bricks that have survived, bear either the maker’s name or a factory mark. In some instances, the source of the clay used for the particular tile or brick is identified.

The early celebrated manufacturers of books all adopted trademarks. Their books contain warnings to infringers and cautions to the public. The so-called “watermarks” on paper are of early origin. [3]

The Temple of Solomon in Jerusalem and the ruins of ancient Troy, Olympia and Damascus have been found to bear quarry marks and stonecutters marks as well.

Further, the lamps and other articles made from clay belonging to ancient times have been found to bear markings as well. It is reasoned that the use of these markings was in response to the expansion of trade in ancient times. Although the suppliers were individuals rather than enterprises, the need for source identification evidently was recognized because of demands from remote consumers for repeat orders for goods whose quality had proved satisfactory. Quite clearly, such marks performed the same basic functions as the modern trademark. [4]

During the period 1300-1200 B.C., there was substantial trade between India and Asia Minor. The Hindus regularly used marks on their goods

Medieval times, especially from fourteenth to sixteenth century saw a vast expansion of trade. The result of this expansion of trade was an increase in the use of marks of different kinds. However, marks tended to be restricted to designs or crude monograms

It was common in mediaeval times for a merchant to adopt an identifying mark that appeared on packages or on the goods themselves, especially when they were to be shipped for considerable distances. One frequently mentioned incident involved some balls of wax that were recovered from a shipwreck. The merchants who had shipped the wax were able to establish their ownership of the salvaged property by the proprietary marks that appeared on the goods.

One of the significant features of the medieval period was the rise of guilds, which were typically organizations of groups of artisans. Most early statutory provisions relating to the marking of goods were supportive of particular guilds. In 1266, England enacted the first bakers’ compulsory marking law.

There is not much information available about the penalties imposed for infringement during the middle ages. One of the incidences of trademark infringement involved a law of Parma dated 1282 that applied to knives, swords and other steel or iron articles. It provided that the artisan must not use the same or a similar mark as any other person in the guild. The penalty was ten pounds for each offence. [5]

In the fourteenth century, an innkeeper passed off a low grade of wine for a superior variety. The penalty for this crime was death. [6]

In 1666, a statute was passed to protect the drapers of Carcassonne. It stipulated that infringers were to be sentenced to the pillory.

In summary, the guild marks which were the principal development of the mediaeval period, evolved into trademarks in the modern sense when goods began to be shipped for substantial distances.

The introduction of the modern trademark generally is considered to date from about the second half of the nineteenth century, in both the United States and England.

India possesses an ancient culture of proprietary protection through marks. It is evidenced, that during the 10th century, a mark synonymous with merchant’s marks increased considerably amongst the traders & merchants. These marks were essentially were used to prove ownership rights of goods like marking cattle, potteries, trading emblems on currencies, etc.

India shared a long history of the culture of trademarks with other countries, however, it was only in 1940 that India adopted its first statute on trademarks. Prior to 1940, questions on infringement, passing off etc. were dealt with by the application of section 54 of Specific Relief Act 1877, and the registration was adjudicated by obtaining a declaration for the ownership of a trademark under Indian Registration Act 1908.

The Trademark Act, 1999 deals with the protection, registration and prevention of fraudulent use of trademarks. The Act of 1999, with subsequent amendments, conforms to the TRIPS and is in accordance with the international systems and practices.

France introduced a system in 1803 under the Factory, Manufacture and Workplace Act, 1803 that made it a crime to pass off another’s seal as one’s own. Finally, in 1857, France established the first comprehensive trademark system in the world with the Manufacture and Goods Mark Act 1857. This law was partially amended in 1890 and 1944 and was repealed in 1964. The present legislation on trademark law was introduced in 1991.

Initially, The Merchandise Marks Act which was passed in 1862 dealt with deceptive indications in England. However, a comprehensive system for trademarks was only passed in 1905. The 1905 Act was amended in 1919 and 1937 until a new Act was passed in 1938. At present, the UK trademark regime is predominantly governed by the Trade Marks Act 1994 and is largely harmonised by the EU trademark law.

Germany introduced its first law on trademarks in 1874. The Trademark Protection Law of 1894 replaced the previous law. Presently the German Trademarks Act which came into force in 1995 is the primary law that governs the protection of trademark law in Germany. A new amendment was introduced in 2019 that talks about the elimination of the need for the graphic or visual representation of trademarks, introduction of the certification mark, new rules for anti-counterfeiting measures, etc.

VII. Trademark Law in the United States of America

Initially, it was the common law that provided protection to trademarks in the US. The Federal Trade Mark Act 1870 was the first statute enacted to protect trademarks. However, this law was declared unconstitutional and hence abolished in 1879. Finally, in 1881 another trademark law was enacted to protect trademark used in interstate commerce. However, this law was found to be incapable to accommodate the needs of the economy and was amended in 1905.

Finally, the Lanham Act was enacted in 1946 to encompass the growing needs of trademark law and is the main federal act to protect trademarks in the US. The Lanham Act sets out procedures for federally registering trademarks, states when owners of trademarks may be entitled to federal judicial protection against infringement, and establishes other guidelines and remedies for trademark owners.