Evolution of Human Rights in India can be traced back to the fifteenth century B.C from Vedas. Traditionally Human rights are known as “natural rights of man” which includes life, liberty and happiness of the people. Introduction Human rights are the basic rights which are very important for the peaceful survival of human beings in all parts of… Read More » 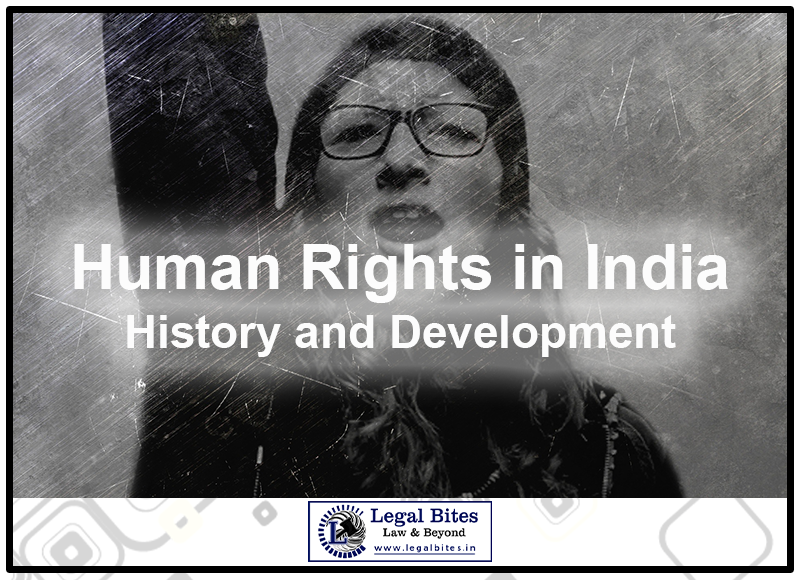 Evolution of Human Rights in India can be traced back to the fifteenth century B.C from Vedas. Traditionally Human rights are known as “natural rights of man” which includes life, liberty and happiness of the people. Introduction Human rights are the basic rights which are very important for the peaceful survival of human beings in all parts of the world. From the beginning of human civilization, human rights have been incorporated in our society. In the beginning, it may be violated but...

Evolution of Human Rights in India can be traced back to the fifteenth century B.C from Vedas. Traditionally Human rights are known as “natural rights of man” which includes life, liberty and happiness of the people.

Human rights are the basic rights which are very important for the peaceful survival of human beings in all parts of the world. From the beginning of human civilization, human rights have been incorporated in our society. In the beginning, it may be violated but it can never be stopped from existing.

Human rights are based on dignity, equality and respect to humans irrespective of their religion, race, caste, sex and place of birth. They are universal, inalienable and essential parts in every human’s life. From the beginning of human civilization people struggled for achieving basic liberty and freedom, this paved the way for the existence of the concept “Human rights”.

The reasons for the development of the concept of human rights shall be social, political, economic conditions, norms of the society, nature and needs of the people etc.

I. Meaning and Definitions of Human Rights

Human rights are the basic standards without which the Human cannot live with dignity. The main concept of human rights is that every person should respect the rights of another and to help each other in case any of their rights have been abused or violated.

The word “Human” means the nature of man or mankind and the word “Right” means every person have or allowed to have in society. Human rights are like freedom, equality and democracy and it is hard to define. Human rights will vary according to place, people, time and other circumstances. It will be changing according to the social and economic conditions of the society. Human rights are a universally accepted principle which supports every human being to live with peace, liberty and justice.

Buddhism and Jainism protected the moral order and dignity of the people. After Buddha, Ashoka policy of non-violence made him protect the Human rights which include equality, fraternity, happiness and liberty of the individuals. People enjoyed many rights in the Hindu Empire. Ashoka secured freedom from hunger, disease, deprivation and prohibit torture and inhuman treatment of the prisoners.

The ancient period developed the common ideas to enlarge unity and harmony irrespective of race, colour, language, religion, gender etc. Most of the Vedas and Smritis stated that the whole world was one family. The ancient jurisprudence abundantly encouraged freedom, equality and liberty for all people.

Medieval India was popularly known as the Muslim period or Muslim era. During the Pre-Mughal period, Hindus were forced to adopt their culture and religious practices. But, in later Muslim period it is considerably changed and modified to its form. During the rule of Akbar the great, he brought many changes towards the Hindus to practice their own religion. It can be clearly seen that “Human Right policy of universal reconciliation and tolerance” was followed by the ruler and the same was followed by his son Jahangir.

The right of an accused to be released on bail existed during the Mughal period, similarly, the accused can be acquitted on the benefit of the doubt. Bhakti movement emerged in India, it regenerated truth, righteousness, justice and morality.

The modern developments of human rights in India emerged during the British period. The torture made by the British against Indians induced the Indians to protest against the rule of Britishers and encouraged the freedom fighters for the freedom movement to safeguard their liberties and fundamental rights and freedoms. The national movement emphasised by Gandhiji not only to free India from foreign rule but also to abolish the practice of Sati, untouchability, Harijan’s rights etc.

The movement is for the fundamental freedom and civil and political rights for the people. The objective of the Indian national congress, in the beginning, is to secure liberties, human rights of non-discrimination on grounds of race, colour etc.

Raja Ram Mohan Roy and Ishwar Chandra Vidyasagar stood against the violence against women’s in India including ‘sati pratha’, child marriage and other outbreaks of violence. They criticised discrimination made against women. Vidyasagar took several efforts to remove legal obstacles for widow remarriage through legislation in 1856 and also played a vital role in promoting education for girl children.

Gandhiji launched Non-violent struggle to emphasise self-governance and fundamental laws for themselves. Jyotiba Phule founded “satyashodhak samaj” to ensure equality among the oppressed class and promote the education of girls. Likewise, Arya samaj and Ramakrishna mission in 1899 were struggling for promoting education for all the sections of the society. Human rights and basic fundamental freedoms are the only things for the Indians to fight against the Britishers.

The proclamation of Queen Victoria on 1st November 1858 declared the secular nature of the state and non-interference in religious practices.

In the Constitution of India Bill 1895, the Indian national congress demanded to insert basic human rights for the people including freedom of speech and expression, right to equality, right to free education etc. Indian National Congress in 1927 set up a committee to draft “Swaraj Constitution” on the basis of the declaration of rights.

In 1927, a committee was set up under the chairmanship of Pt. Motilal Nehru. The committee suggested 19 fundamental rights be incorporated in the constitution of India. The Constitution of India 1950 incorporated 10 fundamental rights suggested under the committee. In 1946 Jawaharlal Nehru passed the objective resolution which contained most of the human rights and it guaranteed safeguard for minorities, backward classes, tribal people, oppressed and other classes in the country.

India got its independence on August 15, 1947, but it was incomplete and on 10th December 1948, when the constitution of India was in making the Universal Declaration of Human Rights was adopted.

The Constitution of India is considered as the supreme law of the land. It was drafted by the constituent assembly and adopted by the people on 26th November 1949 and came into force on 26th January 1950. At the commencement of the Constitution, it consists of 395 Articles, 22 parts and 8 schedules. Currently, the constitution of India has 395 Articles, 22 Parts and 12 Schedules. The most important provisions of the Indian constitution are considered to be fundamental rights from Article 14 to Article 31.

These rights are considered to be essential for the human being to live peacefully and with liberty in the country. In Part IV the constitution of India provided directive principles of state policy for the implementation of those human rights. The Constitution of India inserted several rights for the betterment of human beings such as Right to equality, Right to freedom, Right to freedom of religion, Cultural and educational rights, Right for enforcement of rights.

V. Role of Judiciary & development of Human Rights in India

The development of human rights in India was made possible through various judicial pronouncements. In the Case, P. Rathinam v. Union of India[1] the Supreme Court held that Right of a person to live with human dignity and the concept of life includes the tradition, culture and heritage of a person concerned.

In the Case, Chameli Singh v. State of UP,[3] the Supreme Court categorised Right to shelter under Article 21 of Indian Constitution. The Court stated that the right to shelter is an essential requisite to the right to life and it should be deemed to have been guaranteed as a fundamental right.

In the Case, Consumer Education and Research Centre and Ors v. Union of India and Ors[4] The Supreme Court held that the right to human dignity, social protection, right to rest and leisure are the basic human rights of the workmen. These are also assured by the charter of Human Rights in the preamble and Article 38 & 39 of Indian Constitution.

In the Case, Parmanand Katara v. Union of India and Ors[5], The Supreme Court held that the basic human right of every injured person brought for treatment in cases of an accident should be given immediate medical aid to preserve life after that the criminal law procedures can be allowed. The court held that preservation of human life is paramount important.

In M/S. Zee Telefilms Ltd v. Union of India[7] the Supreme Court of India observed that right to development in developing countries in all spheres is also human right and as such has a direct nexus with the increase in capabilities of human beings as also the range of things they can do.

VI. List of some of the important breakthroughs and laws on the promotion and protection of human rights in India

Human Rights are the basic rights that every individual should have to live in a peaceful environment. From the ancient period as described in the Rig Veda, Manu Smriti, even in Jainism and Buddhism religion, followed humanitarian theory. In medieval period Muslim rulers adopted the human right policy for the effective functioning of the state.

The modern time was classified into the pre-independence and post-independence period and developed human rights in India through various statutes and judgments made by the judiciary.

[6] Article 1(1) of The International Covenant on Economic, Social and Cultural Rights.