Legislation and its Types

Introduction “Legis” means law and “latum” means making. Legislation means lawmaking. It also refers to the law made by the legislature. It may also be defined as the promulgation of legal rules by an authority which has the power to do so. It is the formal declaration of the legal rules by the legislative organ of the body… Read More » 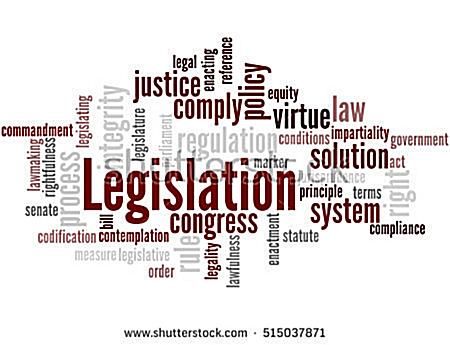 Introduction “Legis” means law and “latum” means making. Legislation means lawmaking. It also refers to the law made by the legislature. It may also be defined as the promulgation of legal rules by an authority which has the power to do so. It is the formal declaration of the legal rules by the legislative organ of the body politic. In a wider sense, it includes all the sources of law, any act done with the effect of adding to or altering the law. When a...

“Legis” means law and “latum” means making. Legislation means lawmaking. It also refers to the law made by the legislature. It may also be defined as the promulgation of legal rules by an authority which has the power to do so. It is the formal declaration of the legal rules by the legislative organ of the body politic.

In a wider sense, it includes all the sources of law, any act done with the effect of adding to or altering the law. When a judge establishes a new principle in a judicial decision, it is possible to say that he has exercised legislative power and it is also legislation. It frames new laws, amends the old laws and cancels existing laws in all countries.

According to Salmond: ‘Legislation is that source of law which consists in the declaration of legal rules by a competent authority.’

According to Austin: ‘There can be no law without a legislative act.’

According to Gray: ‘Legislation means the forma utterance of the legislative organs of the society.’

Analytical Positivist– A typical law is a statute and legislation is the normal source of lawmaking. The majority of exponents of this school do not approve that the courts also can formulate law. They do not admit the claim of custom as a source of law. Thus, they regard only legislation as the source of law.

Historical School of Thought– Legislation is the least creative of the sources of law. The legislative purpose of the legislation is to give better form and more effective the custom which is spontaneously developed by the people. They do not regard legislation as a source of law.

The legislation is generally used in a more limited sense.

Courts, on the other hand, are engaged in the settlement of disputes and any law making that they may do is only with reference to actual disputes before them and only in so far as is necessary for their solution. Thus we may say that judicial lawmaking is incidental to the solving of legal disputes; while lawmaking is the main function of the legislature.

A legislation is most accurately termed as the enacted law, all other forms being distinguished as un-enacted. However, in a jurisprudential sense, Legislation includes only an expression of the will of the legislature directed to the making of the rules of law.

“Case law is gold in the mine-a few grains of the precious metal to the tons of useless matter-while statute law is a coin of the realm ready for immediate use.” – Salmond

Legislation or “Statutory law” is a law or the process of making a law which is “enacted” by a legislature while the legislature is the body or chamber of people who make, amend or repeal laws. An item or piece of legislation is known as a bill before it becomes a law. The “paramount consideration “in enacting laws in a ‘Welfare State’ should be “the best interests of the people, “particularly women and children, in which a standard is echoed throughout the legal instruments on women and children’s rights, Scheduled Castes, Scheduled Tribes and other backward classes.

Legislation can have many purposes, for example, to regulate, to authorize, to prescribe, to provide, to sanction, to grant, to declare or to restrict and repeal.

The Supreme legislation is by the sovereign power of the state. Therefore, any other authority within the state can, in no way, control or check it. It is considered not only supreme but legally omnipotent. A classical exposition of this principle can be found in Dicey’s book, ‘The Law of the Constitution’. There is no legal limitation on its power. Indian parliament is also supreme. Though there are certain constitutional restrictions upon its power, it is not subject to any other legislative authority within the state. It cannot be repealed, annulled or controlled by any other legislative authority.

The countries which are not independent, and are under the control of some other state have no Supreme power to make law. Such countries are of various classes: as colonies, dominions, protected or trust territories etc. The laws made by them are subject to the Supreme legislation of the state under whose control they are. Thus it is subordinate legislation. Britain has had many colonies and dominions. The laws made by them for the self-government are subject to alteration, repeal or supersession by the legislation of the British Parliament. As the colonies are fast achieving independence, and almost all the British dominions have uncontrolled power for legislation, therefore in the near future, we may not have this class of subordinate legislation.

When legislative powers are delegated to the executive, it is called executive legislation. Though the important function of the executive is to implement the laws and carry on the administration, it is always entrusted with some subordinate legislation powers also. Today, practically every law enacted by the legislature contains delegation clauses conferring law-making powers on the executive to supplement the statutory provisions.

Municipal bodies are given powers to make bye-laws concerning their local matters. Bye-law made by a local body operates within its respective locality. In India, such municipal bodies are Municipal corporations, Municipal Boards, Zila Parishads, etc. There is a move for granting very wide powers to Panchayats. Thus, there is a possibility of expansion of this kind of subordinate legislation in our country.

Sub-Delegation is also a case in Indian Legal system. The power to make subordinate legislation is derived from existing enabling act. It is fundamental that the delegate on whom such power is conferred has to act within the limits of the enabling act. Its purpose is to supplant and not to supplement the law. Its main justification is that sometimes legislature does not foresee the difficulties that will come while enacting the law.

2) A Comparison between Legislation and Precedent (case laws)