The Narcotics Control Bureau (NCB) and its Altruistic Attribute

Different investigative bodies from the police to the Narcotics Control Bureau (NCB) became involved in the Sushant Singh Rajput case. The case was handed to the CBI after the allegations on the state police underperforming to “protect” unnamed abettors or murderers. Society played a significant role as for a few weeks, we had judges and spectators in millions.… Read More » 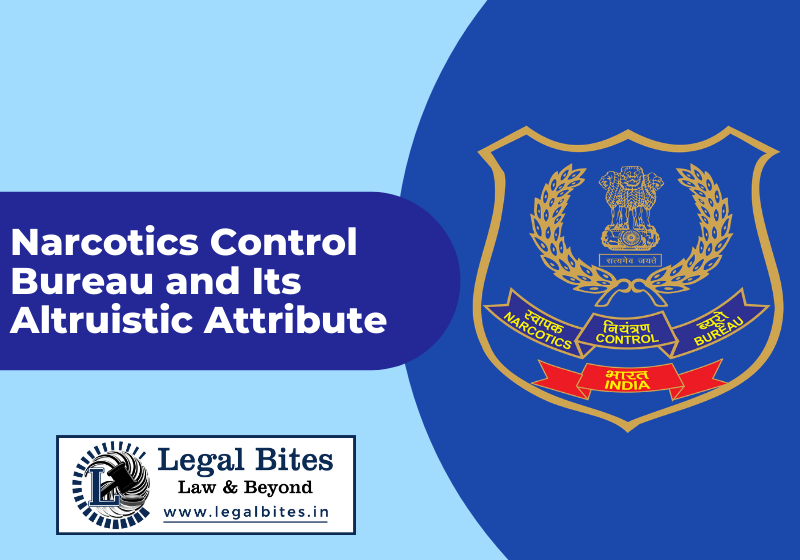 Different investigative bodies from the police to the Narcotics Control Bureau (NCB) became involved in the Sushant Singh Rajput case. The case was handed to the CBI after the allegations on the state police underperforming to “protect” unnamed abettors or murderers. Society played a significant role as for a few weeks, we had judges and spectators in millions. It was surprising to find out the ability of my fellow citizens. It was equally funny to see the shift in the stance. Alas, from an alleged murder case, the focus shifted to the folly of drug consumption.

In this article, Tushar Kol discusses the functions of the NCB and expresses his opinions on the fiasco that followed the death of Bollywood actor Sushant Singh Rajput.

I. A Tragic Death and a Public Spectacle

What can be more depressing than the death of a young man?

As witnessed, the aftermath is no less than a farce. A spoiled theatre not because it did not have perfect elements to move but because of impassive bystanders. The unfortunate demise of the actor Sushant Singh Rajput has different meanings for different sets of people. The market of conspiracy theories flourished. People who were deadpan a moment ago suddenly experienced the newly found bhava and rasa as depicted in the Natya Shastra. The whole thing turned out to be a series of mendacities.

The people who were hooting for the custody and hanging of the “prime suspect” transformed into people howling against drug consumption in the Indian film industry. Then came Narcotics Control Bureau in the picture. Those who had never heard of NCB before started idolizing the agency. NCB arrested 34-year-old actor Rhea Chakraborty under sections 27A, 21, 22, 29 and 28 of the Narcotic Drugs and Psychotropic Substances (NDPS) Act. NCB filed a criminal case against her claiming to have proof about the consumption of banned substances.

In a systematic democracy or anywhere in life, it is important to do the role that is assigned to us for proper and rich functioning. Failing which the outcomes can be harmful to the individual as well as for the whole idea of democracy as pointed out by me in my article, “Extra-judicial Killings and a Cry for Justice”. [1] What are drugs and psychotropic substances under NDPS Act? What is NCB? Why was it formed? What function does it perform? What is its limitation and if it has the mandate to meddle in this case? These are some of the points at issue this article will attempt to discuss fairly.

The NDPS Act, 1985 constitutes the statutory framework for drug law enforcement in India. The enactment consolidates the erstwhile Acts viz., the Opium Act 1857, the Opium Act 1878 and the Dangerous Drugs Act, 1930. India is a signatory to the Convention on Narcotic Drugs 1961, as amended by the 1972 Protocol, the Conventions on Psychotropic Substances, 1971 and the United Nations Convention against Illicit Traffic in Narcotic Drugs and Psychotropic Substances, 1988. Article 47 of the Constitution mandates:

“State shall endeavour to bring about prohibition of the consumption except for medicinal purposes of intoxicating drinks and of drugs which are injurious to health.” [2]

III. Drugs and Psychotropic Substances under the NDPS Act

The list and classification are not exhaustive as section 3 of the NDPS Act provides the power to omit and add to the list. The power lies with the central government.

Interestingly, bhang is one of the forms of cannabis and cannabis and its various forms come under the purview of the NDPS Act. But the production, sale and consumption of bhang are outside the purview of the NDPS Act as it is not made from cannabis resin or from flowering tops, it is not covered under the NDPS Act, 1985. The production and sale of bhang are permitted by many State Governments. Whoever is so licensed to produce bhang shall be allowed to produce it from the leaves of the wildly grown cannabis plants only. [3]

The Narcotics Control Bureau was created in March 1986 in terms of Section 4 (3) of the Narcotic Drugs and Psychotropic Substances Act, 1985, which envisages an authority for taking measures with respect to such matters under the Act as may be specified by the Central Government, subject to the supervision and control of the Central Government. Since India has signed different UN conventions against narcotic drugs and illicit trafficking, it has a role in the prevention of the import of narcotic drugs from other countries and to stop the usage of India as a transit point for narcotics bound for a third country. The role of the NCB includes:

Narcotics Control Bureau is also responsible for the enforcement of the provisions of the NDPS Act.

According to national policy, the role of the NCB is widespread and includes drug law enforcement, the identification and destruction of illicit opium and cannabis crops, receipt and monitoring of returns regarding controlled substances under the NDPS (Regulation of Controlled Substances) Order, 1993, the compilation of seizure statistics from different agencies, etc. in coordination with other agencies and organisations.[4]

Speaking to the press, the deputy director-general of the Narcotics Control Bureau, Mutha Ashok Jain said:

“Normally we look into international and interstate connections. We look for the big fish. Normally this is not part of our mandate.” [5]

National Policy on narcotic drugs and psychotropic substances also points out that on the state level, drug law enforcement is under state police or state excise officers. However, there is no specific and absolute restraint on NCB’s indulgence in smaller cases.

VI. NCB: Cases in the Recent Past

The Deputy DG of NCB was correct in saying that to deal with Rhea Chakraborty’s case is not their mandate but if the responsibilities have been laid on them, they won’t shrug their shoulders. According to the National Policy on narcotic drugs and psychotropic substances, the state police have been given a role to deal primarily in a smaller case and if they smell something big, the NCB may get involved to investigate inter-state or international links.

In this particular case, things became strange because of the total loss of faith in the state police by the public. It might be true that Central Govt., reading the situation between the state police and the sentiments of the public, came up with a political move to gain.

The Indian film industry is a large network. From casting couch to drugs, one can find mishaps ranging differently. It must not be ignored that this particular case may have big fishes involved. Whether the involvement of the NCB at the earliest will be fruitful or not, only time will tell. It is crucial to understand that if the CBI and NCB will deal with all the cases, what will the state police do? We have seen a rise in the demand for handing over cases to CBI in every other case on just one significant ground that state police have lost their credibility nationwide.

Whether the NCB will become a new CBI? This particular case has the potential to create a shift in the role of the NCB in smaller cases overshadowing the state police in drug-related cases within a state.