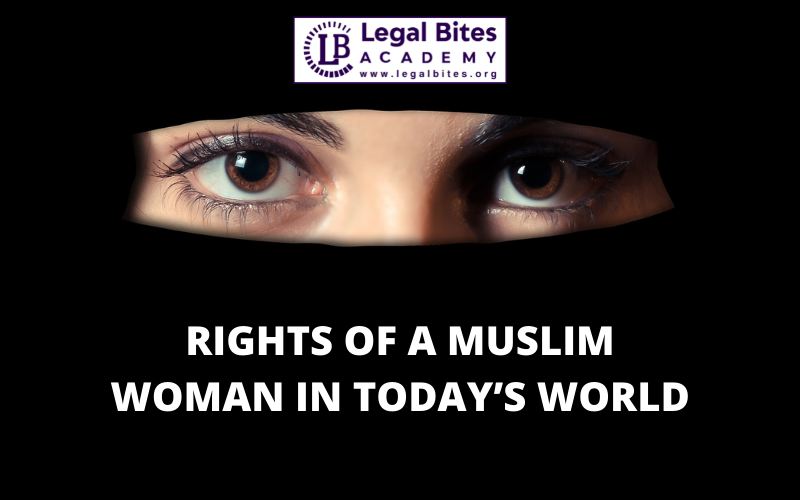 This article by Eshanee Bhattacharya focuses on the Rights of a Muslim Woman in Today’s World. Read it only at Legal Bites.

The three wheels of the international forum are LPG – Liberalization, Privatization and Globalization. These three phenomena have dramatically changed the lives of both men and women around the globe. Rapid social change, higher education, job opportunities, increasing violence, loss of tolerance are all features of the present globalised society. Globalization offers both blessings and curses to women all over the world.

Women from all over the world. Globalization has given women a new name, new financial independence, a new freedom of speech, a new social identity, status, and so on. By taking women to work, globalization has given women the power to combat poverty and operation. In the age of globalization, the privatization of education and health sectors has the worst effects on women in the world. Feminization of poverty and feminization of jobs are recent phenomena produced by globalisation.

The status of women in Muslim countries varies qualitatively from that of Western culture. Women have fewer legal and social rights and a tradition of general and systematic marginalization. The custom and tradition is one that does not offer women their own voices easily, and they have a subservient status under culture, society and law.

Honour violations are still common in the Muslim world, and in most Islamic countries women are not permitted to fly, either globally or locally, without the permission or escort of a husband or a male relative. Veils, hijabs, are also compulsory. Evening curfews are not rare for women.

“Moral policing” is a frighteningly common practice in which women are persecuted for not agreeing with the norms (e.g.: recently a woman was stoned to death outside her house because she wanted to do so)[1]. Wide-spread gender discrimination patterns are still widespread in Muslim countries.

Women are faced with struggles within the legal system. In Pakistan, one man’s testimony is equivalent to that of two women. Women’s testimony is therefore not admissible in cases of adultery. It is also very straightforward to accuse a woman of adultery, and it is normal for a woman to be convicted of adultery in a rape case. Women have minority status and are thus, under the guardianship of their father or brother prior to marriage.

A man can easily divorce his wife from the court, but if a woman wants a divorce, she must put her case before the court on fair and legal grounds. Marriage is related to procreation, which is of course the main component of reproductive rights. It seems that the subordination of women and their rights to marital law would parallel access and the opportunities for reproductive choices, but in fact, the two issues do not coincide as much as one would have assumed.

Judicial problems surrounding the role of women in the Middle East appear to be somewhat different from those in the West. While there are feminist organizations in the Middle East, they tend to be small and lack substantial input into the political process.

As a result, the change in the status of women was not as much a result of pressure from the women’s organisations as it was from the urge of male members of the political elite to modernize and industrialize their economies, to use law reform as a tool for social engineering. It is where political leadership has judged that legal changes to the status of women will facilitate the achievement of complete modernisation by reforms.

One line of scholarship is the faith, specifically religious standards, which explains the persistence of gender differences in Muslim countries. Prevalent interpretations of Islam emphasize conventional gender roles and recommend separate treatment for men and women. Islamic law (Shari’a) offers, for example, restricted rights for women to initiate divorce and limit female inheritance, child custody and in some areas, freedom of movement. Religious norms are often defined, whether by tenet or practice[2].

The acceptance of state religion, the establishment of religious institutions (e.g. courts or ministries) or the teaching of religion in schools elevates the status of religious symbols, elites, and authority to become central components of state power, identification, and legitimacy (e.g., in Greece, Israel, or Egypt).

The state religion is thought to increase resistance to the reform of women’s rights, particularly in areas such as family law, where religious doctrine determines which rights women enjoy. Politicalization of religion in particular the acceptance of the state

Attributes gender discrimination to Muslim societies ancestry, intensification or continuation of patriarchal norms and systems. In its classical context, we use the word patriarchy to mean a system of social relations dominated by patrilocal-patrilineal institutions and to draw on the idea of neo-patriarchal states in our discussion of the codification of male rule in state law[4].

While the accounts vary, all of these theories argue that state policy on women’s rights is related to the economic and political needs of the state.

Scholars of this tradition argue that the existence of patriarchal institutions at the national level is related to post-colonial state-building projects in which (new leaders strive to retain power and establish legitimacy. After independence, weak states frequently made alliances with strong clans or tribes, preferring those patriarchal kinsmen.

Islam draws an essential distinction between the right to (separate property and the right to inheritance. Despite unmistakable support for women’s rights to land, the prevalent interpretations of Islamic law stipulate that women inherit half as much as men.” These differences have a profound impact on women’s ability to build equal wealth and power for men, tempering to some degree the excitement that we may have for the expansion of independent property rights.

Courts have routinely upheld the right of women to property and inheritance when women contest male circumscriptions of their rights. In countries with strong legal structures, the number of women owners of property may be almost equal to that of men.

In the Ottoman period, Islam’s regard for women’s property rights was so widely established that Christian and Jewish women frequently sought inheritance rights through Islamic courts, as their own religious laws did not grant comparable rights[5].

Although the status of women’s property rights is understood to be focused on historical research from a handful of countries, a range of findings are evident. First, Muslim women played an active role in the acquisition and management of land, while at times male relatives confiscated their property. Second, the courts and by extension, the state usually uphold the rights of women to land. Third, amid religious dictates, the extent to which Muslim countries extend fair property rights for women varies.

1. The Universal Declaration of Human Rights

Adopted by the United Nations in 1948, asserts that:

“Everyone is entitled to all the rights and freedoms set forth in this declaration, without distinction of any kind, such as race, colour, sex, language, religion, political or other opinion, national or social origin, property, birth or other status.

2. Declaration on the Elimination of Discrimination against Women

Adopted by the United Nations General Assembly in 1967, states that:

“All appropriate measures, particularly legislative measures, shall be taken to ensure to women, married or unmarried, equal rights with men in the field of civil law, and in particular the right to acquire, administer, enjoy, dispose of and inherit property, including property acquired during marriage.”

Muslim marriage in India is a civil contract and the dower serves as a factor in that contract. This is in reality, more than that; it is a symbol of respect towards wife”

“Mahr or dower is a sum of money or other property which the wife is entitled to receive from the husband in consideration of the marriage.”[6] It is a duty placed on her husband as a sign of gratitude for his wife. After divorce, the wife does not become indigent; the dower serves the function of keeping the wife out of such circumstances after the marriage has been dissolved.

Mahr is graded as a dower (Mahr-i-musamma) and a customary dower (mahr-i-nil). The stated dower may be further divided into the prompt dower (Ma’ajjal) and the deferred dower (Mu’ wajjal)[7]. When the sum of the dower has been specified before or after marriage, the specified dower is named. Prompt dower is payable immediately after marriage on the request of the wife after or before consummation. Mahr payable at the time of dissolution of marriage shall be considered a deferred dower.

According to the results of the Sachar Committee, Muslim women have the lowest job rate involvement 60% of them are self-employed and are localized in art and crafts work on embroidery.

Most are employed in the secondary and tertiary sectors. In the manufacturing and industrial sectors, Muslim women are engaged in low-income jobs under weak contractual conditions. Education is a means of freeing Muslim women from bad working conditions.

People of various religions have the right to profess, spread, and practice any religion in which they have little confidence. However, in the present study, freedom of religion does not mean the interests of a specific gender are vindicated, e.g. of a Muslim. Marriage, divorce, succession, etc., are still subject to personal laws in our country. The reform of personal laws is not to be considered as contrary to Article 25.

One cannot dream of dragging personal laws to the back of the secular rules of the next century. Personal laws are incompatible with the principles of human rights and the Directive. The Judiciary Sensitivity and Humane Judgment in Shah Bano[8] had to suffer because of the hard-bited decision of the central government at the time of the elections. The religious code governing matrimonial relations does not suit the present situation.

VII. Development in the Indian Judiciary after the Triple talaq verdict

In a landmark judgment of Shayara Bano v Union of India and Ors, the Supreme Court ruled that the Muslim practice of Talaq-ul-Biddat was “Void” as well as “unconstitutional.” Justice Khehar argued that any sort of divorce practice that is inconsistent with the Quran’s principles is unacceptable.

This far-reaching decision has heralded a new period for the Muslim women empowerment agenda. Indeed, by this decision, the Supreme Court founded a secular ruling that kept the constitutional spirit of equality high. This Judgement is believed to save the Muslims when from arbitrary divorce laws.

Though women have been granted different rights under the Indian Constitution and other laws, they are recognized as vulnerable. Preamble supports justice, equality and freedom, but sadly personal laws are excluded from the framework of laws inconsistent with the constitutional spirit.” Personal laws and their reform are at the centre of this discussion.

The report of the Sachar Committee commendably illustrated Muslim women in most parts of the world suffering from illiteracy, poverty and under-average jobs. More and more researches and studies need to be done and more initiatives should be taken by the state to improve the status as well as the situation of Muslim women by bringing in more liberal as well as gender-neutral laws.

[3] Laurence R. Iannaccone. “The Consequences of Religious Market Structure: Adam Smith and the