Fundamental Right To a Clean and Healthy Environment

The right to a clean and healthy environment has been the focal point of deliberations since time immemorial. A clean and healthy environment is a prerequisite for the existence of human civilization. It is indispensable for the holistic growth of the society. The discourse of human rights builds upon the values of dignity which are inseparable and which… Read More » 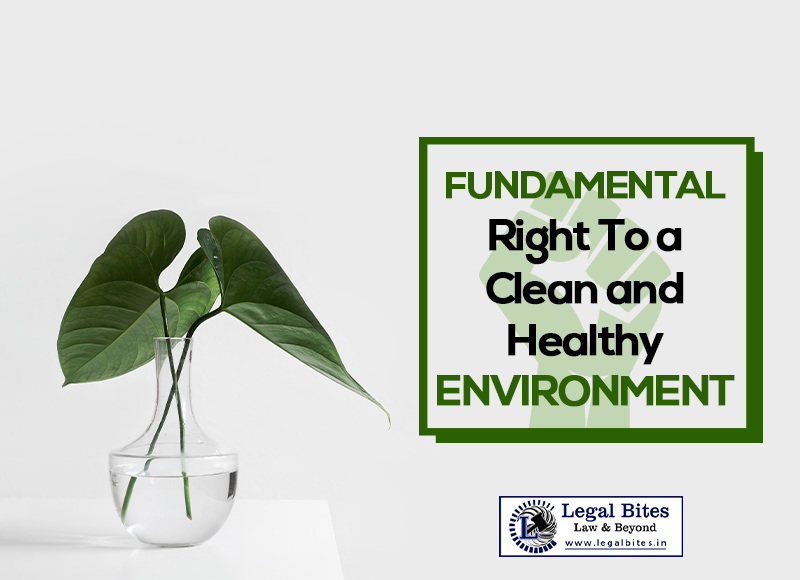 The right to a clean and healthy environment has been the focal point of deliberations since time immemorial. A clean and healthy environment is a prerequisite for the existence of human civilization. It is indispensable for the holistic growth of the society. The discourse of human rights builds upon the values of dignity which are inseparable and which cannot be traded-off. Generations after generations have debated upon the place of the right to environment in the discourse of...

The right to a clean and healthy environment has been the focal point of deliberations since time immemorial. A clean and healthy environment is a prerequisite for the existence of human civilization. It is indispensable for the holistic growth of the society. The discourse of human rights builds upon the values of dignity which are inseparable and which cannot be traded-off. Generations after generations have debated upon the place of the right to environment in the discourse of human rights[1].

M Preetha traces the development of the right to a clean and healthy environment as a fundamental right in the Constitution of India.

The term environment can’t be defined precisely because it is linked with many subjects like ecology, biology, geography, physiology, psychology etc. but within layman terms, the environment is often defined in terms of the surroundings like natural resources, atmosphere, water bodies, etc., wherein an organism lives. This definition is consistent with Einstein’s statement, “the environment is everything that isn’t me.”

II. Fundamental Rights and the Right to a Clean Environment

Article 32 of the Constitution empowers the Supreme Court in an appropriate proceeding to issue not only the writ of mandamus, certiorari, prohibition or quo warranto but also the other direction, order or writ for the enforcement of fundamental rights.

An equivalent power is vested within the High Courts under Article 226 of the Constitution. It is upon the exercise of this power of review that the Courts are called upon to make a decision whether any instrumentality, agency or organ of the state has transgressed or exceeded the bounds of the power conferred upon it and to make sure that the state and the public officials fulfil the requirements of the Constitution and the law under which they exist and perform their duties.

In addition to the chapter on Fundamental Rights, the Constitution of India contains a chapter on Directive Principles of State Policy, which emphasize in amplification of the preamble, that the goal of Indian polity is not individualism, but state, where the state has positive duty to make sure to its citizens social and economic justice and dignity of the individual.[3]

Today we live in a nuclear arena. Nobody can overlook the harm caused to the environment by the nuclear bombs dropped by aeroplanes belonging to the United States on the Japanese urban communities of Hiroshima and Nagasaki amid the last phases of World War II in 1945.

Day to day innovation and advancement of technology, apart from development, additionally expands the danger to human life. Accordingly, there arises an intense and an acute need of the law to maintain pace with the necessity of society alongside individuals. So now the question of environmental protection may be a matter of worldwide concern and it is not confined to any country or territory[4].

IV. Environment as a Basic Right

The concept of human rights generally emerged after the Second World War, but the right to a healthy environment, together with these human rights, was never a priority. Today, this right is an emerging concept that is being hotly debated within the human rights arena.

Environmental deterioration could eventually endanger the life of the present and future generations. Therefore, the proper way of life has been utilized in a diversified manner in India. It includes, inter alia, the right to survive as a species, quality of life, the right to measure with dignity and therefore the right to livelihood.

In India, this has been expressly recognised as a constitutional right. Article 21 of the Constitution of India states:

“No person shall be deprived of his life or personal liberty except consistent with procedures established by law.”

The Supreme Court expanded this negative right in two ways. Firstly, any law affecting the personal liberty of any person should be reasonable, fair and just. Secondly, the Court recognised several unarticulated liberties that were implied in Article 21. It is by this alternative method that the Supreme Court interpreted the right to life and private liberty to incorporate the right to a clean environment[5].

“The State shall endeavour to protect and improve the environment and to safeguard the forests and wildlife of the country.”

The said amendment imposed a responsibility on every citizen in the form of Fundamental Duty.

Article 51-A (g) which deals with Fundamental Duties of the Citizens states:

“It shall be the duty of every citizen of India to protect and improve the natural environment including forests, lakes, rivers and wildlife and to have compassion for living creatures.”

Thus, the protection and improvement of the natural environment is the duty of the State (Article 48-A) and every citizen (Article 51- A (g)).

” The Parliament has the power to make any law for the whole or any part of the country for implementing any treaty, agreement or convention with any other country.”

In simple words, this Article suggests that in the wake of the Stockholm Conference of 1972, the Parliament has the power to legislate on all matters linked to the preservation of the natural environment. Parliament’s use of Article 253 to enact the Air Act and Environment Act confirms this view. These Acts were enacted to implement the decisions reached at the Stockholm Conference[6].

At the very outset, the preamble establishes that our country is predicated on the “socialistic” pattern of society, in which the state pays more attention to social problems than on individual problems. The essential idea behind the concept of socialism is to market a “decent standard of living for all” which is only possible in a pollution-free environment.

Pollution is taken into account together with social problems. The state is thus compelled by the Constitution to concentrate on the present social problems to determine a just social order.

This objective of the preamble is vividly reflected in Part IV of the Constitution, which deals with the directive principles of state policy. The preamble further declares India to be a “Democratic Republic”. In such a setup, people have the right to understand and to participate in the governmental policies and access information on environmental policies, something that is extremely important for the success of governmental policies.

Other objectives of the preamble include justice, liberty and equality which find their place within Part III of the Indian Constitution that deals with fundamental rights[7].

International concerns about human rights, health and environmental protection have expanded considerably within the past several decades. In response, the international community has created a huge array of international legal instruments, specialized organs, and agencies at the worldwide and regional levels to enhance and to identify problems in each of the three areas.

Often these have appeared to develop in isolation from each other. Yet the links between human rights, health and environmental protection were apparent from the primary international conference on the human environment, held in Stockholm in 1972[8].

In the three decades since the Stockholm Conference, the links that were established by these first declaratory statements are reformulated and elaborated in various ways in international legal instruments and therefore the decisions of human rights bodies. In large part, these instruments and decisions involve taking a rights-based approach to the topics, albeit with different emphases.

The primary approach, perhaps closest thereto of the Stockholm Declaration, understands environmental protection as a pre-condition to the enjoyment of internationally-guaranteed human rights, especially the rights to life and health. Environmental protection is thus an important instrument within the effort to secure the effective universal enjoyment of human rights.

Environmental treaties generally don’t establish complaint or petition procedures. Within the absence of such procedures, cases concerning the impact of environmental harm on individuals and groups are delivered to international human rights bodies. Additionally, these bodies have sometimes addressed the intersection of human rights, health and environmental protection, general comments and have posed inquiries to states about the topics during their consideration of periodic state reports.

VII. Judicial Pronouncements regarding the Fundamental Right to a Clean and Healthy Environment

Polluter Pays Principle– It supports a remedial system which is concerned about fixing natural damage. It is a standard in global environmental law where the polluting party pays for the mischief or harm done to the natural environment. It was made a piece of constitutional ruling in Vellore Citizens Welfare Forum v. Association of India.

Precautionary Principle– Environmental measures must anticipate, prevent and attack the reasons for environmental degradation. Lack of scientific certainty ought not to be used as a purpose behind delaying measures.

Public Trust Doctrine– The Public Trust Doctrine principally lays on the rule that specific resources like air, water, sea and the forests have such an extraordinary significance to individuals all in all that it would be completely unjustified to make them a subject of private possession. It was set up in the case of M.C. Mehta v. Kamalnath and Others.

The Doctrine of Sustainable Development– The apex court observed that sustainable development has come to be accepted as a reasonable idea to destroy poverty and improve the nature of human life while living within the conveying limit of the supporting eco-system in Vellore Citizens’ case and the RLEK, Dehradun case.

[4] Atisha Sisodiya, The Role of Indian Judiciary in Protection of Environment in India, Available Here

[6] Constitutional provisions for the protection of the environment with relevant case laws, Available Here